Texas early exploration and missionary efforts dated from 1519 to 1690 and through 1793 was the mission settlements and Spanish dominion.
The Lipan Apache Indians held sway during the early mission period, before the mid-1700s the Lipans were driven South & Westward by the fierce Comanche, who at first occupied just the upper Panhandle of Texas. From then on, the Indians knew that (now) Garza County was "Comanche Country". It remained that way until Quanah Parker took the straggling remnants of his tribe to surrender at Fort Sill, Oklahoma Territory.
For a century and three quarters the Comanche harassed the Spaniards, their Pueblo neighbors in New Mexico, and terrorized the Texas frontier with numerous raids.
During the war Between the States and immediately following, the Comanches, now joined by their fierce kinsmen, the Kiowa, took captive many white women and children, killed large numbers of frontier people and drove the settlers back into Northern Texas.
Treaty followed treaty, between these Indians and the government, but there were constant uprisings by the Indians to break the truces until finally the US Army began a merciless campaign against all Indians found off their reservations. This campaign did not close until the resistance of the Comanche and allied tribes was broken in 1875.
The first white settlers came in the early 1870s when buffalo hunters were gradually replaced by cattlemen. The buffalo was one attraction that had made the region popular with the Indian. Their way of life was determined by abundance of horses and buffalo on the grass- covered plains. They subsided largely on vast herds of buffalo for meat, warm and heavy clothing, and covering for lodges. 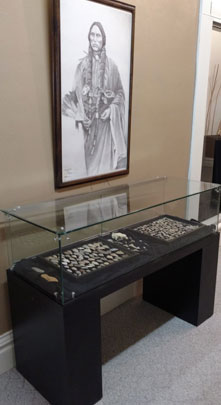 The Garza point is a triangular light arrow point with a single basal notch. The edges of the blade are straight and sometimes serrated. The Garza shows beautiful flaking, but sometimes may only be chipped on one side.
Collectors have been finding Garza types for many years in West Texas. However, no name was known for these finely chipped arrow points until 1959 when the South Plains Archeological Society excavated a small site in Garza County, Texas. The Garza point got its name from thirteen triangular points, which had a centrally placed basal notch. They were excavated from a site about 16 miles south of Post, Texas. The actual naming of the Neo-American point is credited to Frank Runkles and Emmett Shedd who supervised the field work on this excavation.
The evidence from this site indicates that the Garza and triple-notched Harrell points are associated and found at the same levels, but it is very rare to find a Garza and a two-notch Harrell point from the same occupational stratum. It is believed the date for the Garza point is from 1000 to 1500 A.D.
A few collectors in this immediate area have found Garza points, but they must be considered very rare and unusual artifacts. These single-notched basal points have been found occasionally from El Paso to Clovis, New Mexico and back to Post, Texas. However, Garza County and the counties which are adjacent to it, produce the greatest abundance of these single-notched basal points. 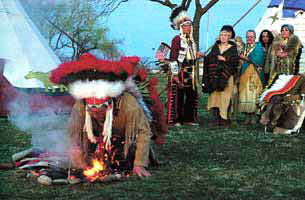 A Traditional Indian Ritual: Held each year at Sunrise on March 22 to predict prospects for the year.
Indians used this ceremony to forecast food supply for the coming year. Pioneers in Garza county began the ceremony in 1906, recalling the Indian legend to predict the years success. Farmers apply the predictions to crops, ranchers to grass supply, business men to business success.
Records kept since that time show the predictions to be 92 percent accurate. Since 1973 "Chief" Frank Runkles, a longtime student of Indian lore, has conducted the sunrise ceremony.
Taba'na Yuan'e means "Sunrise Wind". An authentic dance used by Plains Indians in which the wind's direction at the exact moment of sunrise to determine the success of the coming year.
According to legend, the wind must be checked at sunrise on the day after the sun reaches the halfway point in its journey from south to north.
A east or northeast wind means: a "very good year". A north or northwest wind indicates an "average year". A west or southwest wind predicts a "poor year" and a south or southeast wind is "very bad year."
The predictions are determined by the direction of the smoke rising from a fire built in the center of the ceremonial circle. The "Chief" and his dancers perform a Four Winds Dance, with the singing of the tribal prayer honoring Mother Earth and to Wakantanka, the Great Spirit Above, seeking their blessings. 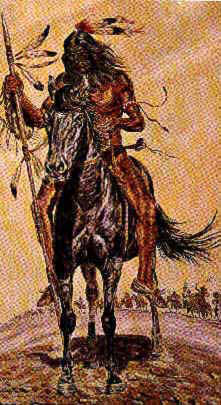 The name Apache most likely came from the Zuni word apachu, meaning "enemy". The Apaches referred to themselves as Inde or Dine', meaning "the people" Generally, the Apaches are divided into Eastern and Western, with the Rio Grande serving as a dividing line. Two groups, the Lipans and the Mescaleros, lived partially or entirely within the confines of Texas. The Apaches went by numerous names. But only the names of Lipans and Mescaleros survived into the nineteenth century.
Apaches arrived in the Southwest between A.D. 1000 and 1400. They apparently migrated from the North along the eastern side of the Rocky Mountains, then spreading westward into New Mexico and Arizona. In time, pressure from the Comanches and other tribes pushed the Apaches farther south and west.
The Apaches were nomadic and lived almost completely off the buffalo. They dressed in buffalo skins and lived in tents made of tanned and greased hides, which they loaded onto dogs when they moved with the herds. They were among the first Indians to learn to ride horses, learning from the Pueblos. They turned their new equestrian skills to raiding for horses and supplies. The Spanish first contacted the Apaches in 1541.
From 1656 to 1675, Spanish settlers and Pueblo Indians of New Mexico suffered heavily from almost continuous Apache raids. Their aggressive behavior turned their neighbors into enemies, and a new, potentially powerful tribe, the Comanche, began pressuring the Apaches from the North. By 1700 the Apaches began migrating southwest as the Comanche, Wichita, and Tijas Indians began to occupy the dominant position on the South Plains. In addition, the Apaches had never adapted completely to a Plains culture. The attempt to improve their source of food was a major cause of their defeat by the Comanche.
During the Apache flight from the Comanche,, many groups moved westward. The Lipans and the Mescaleros, fled southward into Central Texas. There they collided with the Spanish. When the Spanish founded San Antonio in 1718, the Apache discovered a convenient accessible location at which to stage raids against their European enemies.
During the 1730s and 40s, the Apaches and Spaniards continued to wage war on each other. But on Aug. 19, 1749, four Apache chiefs with numerous followers buried a hatchet along with other instruments of war in a peace ceremony at San Antonio. The Apaches, decimated by Comanche raids, appeared willing to accept Christian conversion in exchange for protection by the Spaniards. The first formal mission for the Texas Apaches was established not at San Antonio, but in the jurisdiction of San Juan Bautista on the Rio Grande. Less that a year later, the neophytes became discontented, revolted, burned the mission buildings and deserted. The missionaries blamed the failure of that first Apache mission on the natural inconsistency of the tribe, as well as on their reluctance to live away from their homelands.
The Texans drew up their own treaty with the Lipan Apaches in 1838. It was an alliance that broke down in 1842, and more than half the Lipan joined the Mescalero.in Mexico.
In 1873, Col. Ronald S. Mackenzie led a force of 400 soldiers into Mexico to destroy the Lipan villages. His army killed or captured virtually the surviving Lipans. They were deported to the Mescalero Reservation in the Sacramento Mountains of New Mexico. In 1905 the rest of the Lipans in Mexico drifted onto the Mescalero Reservation. In 1970, about 1660 Indians were enrolled there. 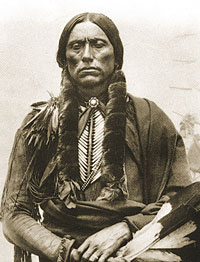 They were hunters living at the sources of the Yellowstone and Missouri rivers in present Montana. They hunted with bow and arrow, the dog was their only domesticated animal and drew a travois with poles attached to a harness.
According to legend a quarrel divided the tribe over hunting spoils. The winners moved southeastward with the Kiowa Apaches to live with friends, the Crow. Those left behind were never heard of again. The Crows taught them to ride horses and hunt buffalo - an animal they had never seen before.
The Kiowa had taken the first step to the acquisition of the Plains Culture by learning to ride and hunting the buffalo on horseback. Horses drew them southward. Gaining horses, slaves, and guns from the Spanish, the Kiowa evolved into completely nomadic lifestyle of predation, pillage, and warfare, until they became one of the most feared and hated of the Plains tribes. With the largest herds of horses, the Kioaws made a lasting peace with the Comanches in 1870 and traded horses and captives with them.
The Plains Indian culture area was the last to develop in North America, it was historic, beginning around 1620 with the introduction of the horse, the buffalo, the tepees, soldier societies, and the Sun Dance. there were some thirty or more tribes but only eleven were typical of the Plains Indian culture. Buffalo furnished almost everything they needed in material culture: food, clothing, tepees, tanned hides, fur robes, bedding, rawhide, leather for saddles, bridles, canteens, horn for spoons, and hooves for glue. The bow was shortened for use on horseback, and vessels had to be unbreakable. Thongs and ropes held things together and could be lashed to the saddle or the travois, which became larger to use with the horse, called the Sun Dog. Everything was adapted for hasty packing and quick movement, often a matter of life or death. A camp habitation could be moved in thirty minutes.
Jewelry used by both men and women were fashioned from Mexican silver coins. Men wore their hair in long braids wrapped in fur strips. Both men and women parted their hair in the middle. Women wore the hair braided or hanging loosely. Over the right ear, men wore a portion of the hair cut short, a tribal symbol. Also the men wore moccasins, of tribal cut with a flap that dragged the ground, usually heavily beaded. In warfare men wore a breast- plate of pipestone that protected the chest. Men wore breech clouts, and women wore a pull-on shift dress to below the knees.
The main weapons and implements used were the bow and arrow, spear, tomahawk (metal type with a pipe at one end became a trade item), shipped flint and obsidian knives, various flint saws, scraper punch or needle of flint or bone, hafted axes and a hafted wide scraper for cleaning hides, fist axes, and eyed bone needles often steel trade needles when available.
Social organization was simple. They had no clan system. The last great head chief was Little Bluff, who died in 1866. The women had no voice in tribal government.
The Kiowa were noted for their depredations in Old Mexico and Texas. One Kiowa attack in 1871 became known across the nation as the Warren Wagontrain Raid. There were greater depredations but the Wagontrain massacre was brought to the attention of President Ulysses S. Grant, the army and the country because Gen. William T. Sherman was inspecting the area at the time. It took a military conquest to place the Kiowa and their confederates on the reservations.
The Kiowa finally turned to assimilation and successfully made the transition to white culture, many in one generation. Independent but highly intelligent, the Kiowa wanted their children educated and taught the new language and new ways. Old Americans they were; not they are an important part of modern America. In 1989 United States census reported 4,800 Kiowa.